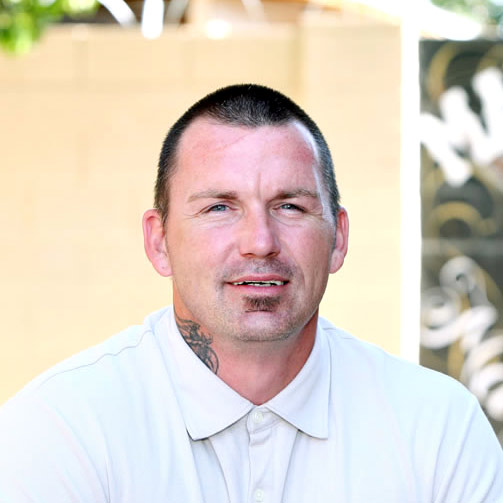 A story of recovery

At 36, Robert stands well over six feet tall, and has the powerful physique of a body builder. Yet, inside his muscular body is a frightened little boy who experienced beatings no child should ever have to endure. When he was four years old his father, an alcoholic, drug user, biker and drug dealer, repeatedly beat him so severely he left permanent scars on Robert’s forehead. When his mother and father split up, things did not get any better for Robert. His mother’s new partner also was an alcoholic, and harshly disciplined Robert for things like not quickly memorizing multiplication tables in first grade.

“When mom split up with her boyfriend, I was free to rebel and I rebelled badly,” Robert said. “I skipped school and began using alcohol and pot. I dropped out of high school and became a lazy pothead, hanging around at home with my enabling mom until I was 20.”

In his early twenties, things got little better for Robert. He got married, had a good job in a mill and limited his drug and alcohol use to weekends. But after four or five years, the marriage broke up because Robert started “using” more than just on weekends. Finally, the law caught up to him and he was sentenced to seven years in prison.

Robert remarried after he got out of prison, but he still needed treatment. He made the decision to become part of Maverick House. There, he confronted his alcohol and drug addiction. And perhaps most importantly – for the first time – he came to terms with the violence he experienced as a child.

Robert graduated from treatment at Maverick House on March 25, 2013 – the day he also decided to keep his recovery going by living at Maverick House Sober Living. At Sober Living, he has a healthy environment of 27 caring men committed to supporting each other and living positive lives without alcohol or drugs. Robert’s wife lives nearby and they have a positive relationship. But, Robert’s home – for now – is Sober Living, because that is where he has the structure and the fellowship of men committed to supporting each other in recovery.